Posted by Alicia Malone on 14 Sep, 2021 in Interview and PCI SSC and Women in Payments 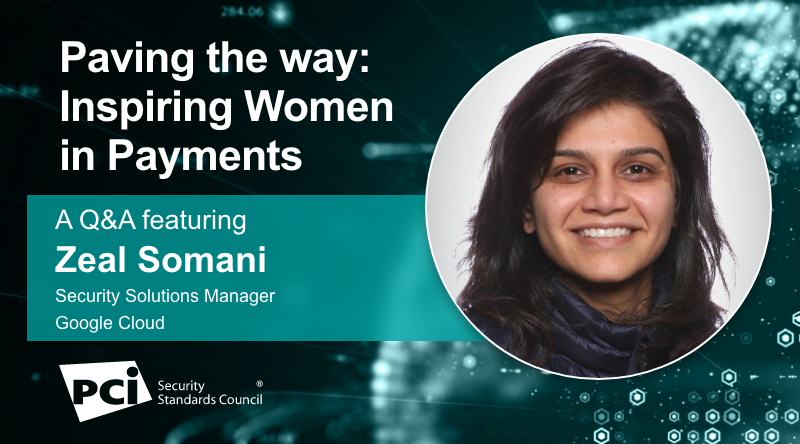 Women alone can be powerful. But women who empower each other can have an even greater impact. In this edition of our blog, Zeal Somani, who was greatly influenced by her grandmother and by her female colleagues, explains that forming close connections with other women and channeling the power of collaboration are key to overcoming unconscious bias that women face in the workplace.

How long have you been at Google and what is your role?

Zeal Somani: I have been at Google for more than three years. I started as a Security and Compliance Specialist within the customer engineering organization of Google Cloud. Aside from helping answer security and compliance-related inquiries about Google Cloud, I worked on a number of best practices documentation around cloud and compliance such as the PCI DSS guide for Google Kubernetes Engine (GKE), and contributed to the PCI DSS blueprint on GKE. Through this work, I collaborated with Googlers across different parts of Google which led me to transition into my current role as a Security Solutions Manager in January of this year. My current role is to develop solutions involving Google and our partner products to help our customers modernize their governance, risk and compliance functions using cloud and cloud-native tools.

How did you get started in the technology or payments industry? What led you to that career choice?

Zeal Somani: I took an unconventional path to cybersecurity, which then intersected with payments. I studied control systems engineering for my bachelor’s degree which is distant from security and payments. At that time, I wanted to work in aerospace. However, in the last year of my degree, I took a course in networking and fiber optics, and it changed my perspective on IT in general. I realized that no matter which vertical I work in, IT and networking will always exist. So, at the end of college, I started applying for entry-level roles in networking. And then I realized if you have networks, you need to secure them. My first real job in security was with a mid-sized IT consulting firm in Dubai who wanted to spin up a practice of securing Industrial Control Systems (ICS) in the region. I joined them due to my background in control systems and that experience was my first exposure to real world security problems. Ever since then, I have stuck with it and I really enjoy it. About five years ago, I decided to become a PCI QSA and that is how I got interested in payments and Fintech.

Who has been your biggest role model in shaping your career path?

Zeal Somani: My grandmother has been my biggest role model. I would love to model her wit, simplicity, and resilience. She was one of the first women in my immediate family to have had a career. She taught Sanskrit and other languages in high school. Her biggest advice to me was to find a niche and always stay curious. She learned how to use computers and smartphones after age 60.

My parents also played an important role in shaping my career path. They always encouraged me and my sister to do whatever we liked doing without bringing in gender bias. My dad took a lot of interest in honing my problem-solving skills. I remember, as a kid, he would ask me to solve small problems such as a puzzle or a chess move.

What is your proudest accomplishment in your career to date?

Zeal Somani: There are a lot of achievements that make me happy. To pick one I would say it was creating a partnership between Google and PCI SSC. Internally at Google we partner with several industry forums like Cloud Native Computing Foundation (CNCF), regulators, and governing bodies. However, my colleague Ann Wallace and I noticed a gap in the amount of interaction with the PCI Council. We worked together to establish a strong relationship between the two and, as a result, we got elected to the PCI SSC Board of Advisors. We were also able to influence dialog around adoption of cloud and cloud-native language in the standards and guidance that come from the PCI Council. We’ve presented at the Community Meetings, at the Board of Advisors meetings, and were actively involved in the Cloud Taskforce. This led to the development of educational content that reaches a large audience of QSAs and ISAs.

Do you notice a lack of women in technology? If so, why do you think that is the case?

Many women in the tech industry have felt that their gender has affected the way that they are perceived or treated. Have you ever been in a situation like that? How did you handle it?

Zeal Somani: I remember when I was working in the middle east and meeting with customers about securing their industrial control systems and power grids, many times I would be the only female - and the youngest - in the room. They (mostly men) were surprised to hear opinions on securing OT and ICS from a 20-something-year-old female -- much younger than their overall tenure in the industry. This was unconventional and an unconscious bias kicked in.

Women trying to rise up into leadership face cultural and systemic hurdles that make it harder for them to advance, such as unconscious bias. One way to overcome some of these hurdles is to form close connections with other women, who can share similar experiences, from how to ask for what you’re worth to bringing your unique talents to leadership.

Over the years I’ve learned that women alone can be powerful. But women who empower each other and build a tribe, they have a greater impact. Women make decisions much differently than men and they really bring a transformative change. The truth is that raising each other up and channeling the power of collaboration is truly how we’ll change the equation—and have a lot more fun along the way.

Were you given any advice during your career that has stuck with you? As a result, do you have a personal mantra or a famous quote that you live by?

Zeal Somani: My grandmother would say to, “find your niche, hone your craft, and make it your DNA”. My first manager was also influential and would say to “simplify and drive clarity”. This has stuck with me. When working on complex concepts, I constantly ask and remind myself, can I whiteboard this? Can I explain this to my five-year-old son? and if the answer is no (to both) I go back to simplifying the concept.

What advice would you impart to other women about how to succeed in the payment industry or in a technology-based field in general? Is there anything you wish you had known?

Zeal Somani: Something that I’ve learned and experienced is that women (and men or anyone) can’t have it all at the same time. You must prioritize, hence learn to say no! Own your schedule and control your time unapologetically. Secondly, prioritize mental health and overall wellbeing. This is even more important due to the current times we live in. The only way to strike a balance is by owning and controlling your schedule.