Posted by Alicia Malone on 14 Dec, 2021 in Interview and PCI SSC and Women in Payments 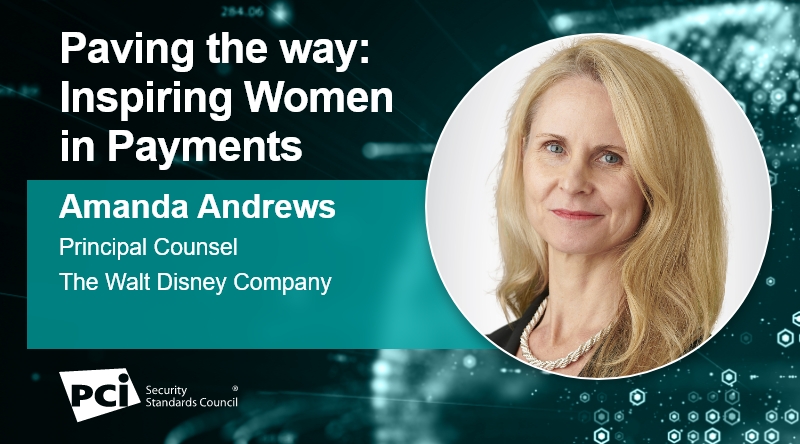 As a young attorney just starting out, Amanda Andrews’ career path would lead her in a direction she never imagined. In this month’s blog series, Andrews’ describes how her experience with Visa Inc. led her into a cybersecurity career with The Walt Disney Company and why you should never take “no” for an answer.

How long have you been at The Walt Disney Company and what is your role?

Amanda Andrews: I’ve been at The Walt Disney Company for just over six years. Prior to that, I was an attorney at Visa for 15 years. I’ve spent 20 years in the payment industry dealing with cybersecurity and payment-related issues.

I’m not your typical individual regarding the path that I took in getting into the payment industry. In the late 1990s, it was at the height of the dot-com era, there were many people leaving their current positions at companies to go to start-ups. I was a very junior attorney. I had just graduated from law school and I had taken a position at a Japanese law firm. I realized that Tokyo was quite far away, and ultimately decided not to move to Tokyo. So, I moved back to California – to the Bay area – and a good friend of mine had recommended that I interview at this company called Visa. I knew nothing about Visa or payment-processing or payments or cybersecurity or anything like that. The gentleman who interviewed me would later become my mentor and longtime friend. I remember his last question when interviewing me was, “Do you think that’s something you can do?” And I said, “I’m not sure but I can certainly try.” He said, “Great! We’ll be in touch.” Fast-forward 15 years, which was my tenure at Visa, and it was a phenomenal education and experience in payments and cybersecurity.

How did you get started in cybersecurity? What led you to that career choice?

Amanda Andrews: After 15 years of being at Visa, I realized I had an immense amount of information that could be shared and, in my continual strive to learn more, I really wanted to understand a different aspect of payments. Rather than being on the network side, I decided to take a position with The Walt Disney Company on the merchant side, which presents a whole new set of issues on a day-to-day basis from understanding how to safeguard the company to what to do in terms of growing the business.

What do you see in the future for women in the cybersecurity industry?

Amanda Andrews: I see such a huge opportunity for women. I think the main thing that women need to understand is that we need their perspective and their opinions. I think the issue right now is that there’s a lack of an advertising campaign, if you will, for women to understand the opportunities that can be had. I think predominantly when women think about technology, they might be turned off because they think it’s about coding or math or things that might not – on the basic look of it – appear to be interesting or engaging. I’m an attorney. I’ve been an attorney for 20 years and never in my wildest dreams did I anticipate getting into cybersecurity. But it’s something that fascinates me and is ever-evolving and changing day-to-day and second-to-second. I think women provide such a unique experience, from how they address things and how they think, that this space could definitely use the input of women.

What advice would you give to young women who are interested in a career in cybersecurity?

Amanda Andrews: For women interested in a career in cybersecurity, the best advice that I could give them – which is advice that my dad gave me – is never take “no” for an answer. If it’s something that you are interested in, then you need to strive to do it. If that’s your dream, then go after it.

What aspects of your job do you enjoy?

Amanda Andrews: There are so many aspects of my job that I enjoy. I think working for a world-renowned company, like The Walt Disney Company, is amazing. The products and the services and the type of reception that The Walt Disney Company receives around the world is second to none. To be a part of that is incredibly special. But I think, most importantly, I enjoy the ability to work with top-notch individuals on a day-to-day basis, from attorneys to technologists to business individuals, that have such a high esteem for the job that they do.